Skip to content
HomeSermon on The Road to Emmaus

Jesus asked the disciples on the Road to Emmaus, ‘Was it not necessary that the Messiah should suffer these things and then enter into his glory?’ Luke 24.26

The inability to perceive

Jesus, whom they have been with only a few days ago; Jesus, whom they have known and followed as their teacher for few years, is now walking by their said speaking and listening to them, standing in flesh and blood before their very eyes, yet they fail to recognise him. In fact, rather than recognition, Jesus is treated as a mere stranger. The disciples are in despair, they are on a journey home, leaving Jerusalem and the aftermath of the crucifixion behind. The event of Jesus’ death has left them confused, disappointed, and filled with sadness. Notice, that failing to recognise their tea 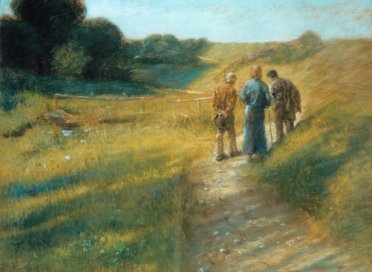 Let us ask the question again: why couldn’t the disciples recognise Jesus; why were they so blind?

The answer to this question lies beyond natural causes. It was not a matter of merely mistaking Jesus for someone else. The answer lies beyond, ‘Oh… they did not look close enough or did not pay proper attention’. The lack of recognition on the part of the disciples is caused by something greater than natural causes. It is caused by the incompatibility between the ‘already glorified’ state of the risen Messiah, and the ‘not yet’ glorified state of the two disciples. The disciples are encountering the Messiah in his Glory. The one who stands with them is the crucified one, the one who has gone through the grave and is now alive! They are standing before the Messiah in his Glory. Let us consider the words of Jesus gain:

‘Was it not necessary that the Messiah should suffer… and then enter into his glory?’

Jesus stands before them as the resurrected one, the one who is already in the state of Glory, a state that lies beyond our ordinary comprehension. Here we have two different types of existence encountering each other. The Rein Christ, the new Man, the New Adam – and the not yet glorified state of the two disciples.
Our eyes are not capable of apprehending the vision of the heavenly. Once upon a time we humans lost the sight to perceive divine reality; once upon a time, our eyes were opened to sin and consequently became blind to the vision of God and his glory. Remember that in Scripture the notion of human eyes being opened to something unnatural is not new. We can recall the story of Adam and Eve (Gen.3) when their eyes were opened to sin, an openness that blinded then to the vision of God and resulted in the loss of access to the Garden and the Tree of Life.
That being the case, the eyes of the disciples are not capable of seeing the heavenly in the natural world. Their hearts have grown dull – it is hardened – and their eyes – while they look, they cannot see.

It is when Jesus heals their hearts and opens their eyes that they finally come to see the Risen Messiah in his glory. He begins by opening the Scriptures, ‘Then beginning with Moses and all the prophets, he interpreted to them the things about himself in all the Scriptures’. This opening of Scripture is not to be taken casually, Jesus opens their minds to understand the Scriptures (Luke 24.45). Hearing him reveal himself heals their hearts. Remember that the disciple’s hearts are dull and hard. Later when they reflect back, they are astonished, asking themselves, ‘were not our hearts burning within us while he was talking on the road to us?’ (v.32) Their dull – hard – hearts have been melted by Jesus when he opened the Scriptures for them. Moreover, the resin and glorified Messiah heals their eyes at the breaking of the bread. And this is certainly a reference to the Eucharistic, where their sight is restored. And once again, all be it for a short time, they are made compatible with the vision of God. They are healed from Adam’s blindness and granted access to partake of the bread of life. ‘Then their eyes were opened, and they recognised Jesus; and he vanished from their sight’. (v. 31). They see Christ in his Glory!

The encounter with the Risen and Glorified Messiah results in a complete reverse of course of the disciples’ journey – A total turn around. Having travelled from Jerusalem they return to it, to tell the others about the resin Lord. And you can see the paradox beautifully played in the story:

The two disciples are moved from arrogance to humility, from instructing their master to being instructed by Him. They are moved from Sadness and despair to unspeakable joy, from blindness to vision, and for hosting a stranger to becoming guests at the Messiah’s table.

The same is true of us, we are on the same journey. The Crucified, Resin and Glorified Messiah is with us. We come to church with dimmed visions of Jesus, and at times with hard hearts. Battered by the events of everyday life, we wonder if the risen Messiah is truly with us. And of course, it is here that the resin Messiah reassures us. It is here that he meets us afresh. It is here in the context of the liturgy that we open the Scriptures, and on its pages, we meet the Messiah. It is here, that Jesus invites us to gather around his table. The risen Lord, himself hosts us. Welcoming us, not simply as guests, but as his brother and sister, feed by his body and nourished by his blood. It is here in the rituals of the Eucharistic liturgy that we get a glimpse of his glory, our sight is restored, our hreats are filled with him.

It is in the Eucharist that we who are yet to be glorified meet the One who is already glorified.

Every time we meet him, he sends us with the vision of his glory back to the world – the world he loved and came to restore. Having freed our hands, he sends us back to serve, and to point to him. Amen