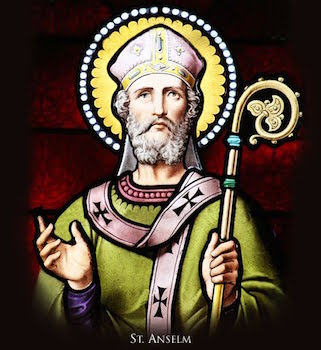 ‘Teach me to seek You, and reveal yourself to me as I seek, because I can neither seek You if You do not teach me how, nor find You unless You reveal Yourself. Let me seek You in desiring You; let me desire You in seeking You; let me find You in loving You; let me love You in finding You.’[1]

St. Anselm of Canterbury (1033 – 1109), whose feast day the Church celebrates on April 21st, is arguably one of the greatest theologians of medieval Christianity. While at times criticised for favouring philosophical speculation over Scripture and theology, his writings contradict such criticisms.[2] As the above quotation shows, Anselm had a deep thirst for God; his prayers indicate convection
that humanity’s fulfilment lies in the knowledge and participation of the divine. To Anselm theological inquiry went beyond the limits of mere rationality to involve the whole of the human person. God, who lives in unapproachable light, is not an object awaiting human inquiry, rather He is found when, and where he chooses to reveal himself. And of course, the when and where of divine revelation is actualised in God’s Son – Jesus Christ – Incarnate and Crucified.
In a series of four posts, I seek to explore Anselm’s most influential work Cur Deus Homo (Why God-Man?).[3] As well as giving a brief account of Cur Deus Homo, I seek to explore the character of Anselm’s Christology, his Trinitarian theology and its relevance for us today and end with an evaluation of his Soteriology.

In many ways the Cur Deus Homo can be compared to St. Athanasius’ De Incarnatione, both works aim to write an apologetic for the necessity of the Incarnation and Crucifixion for Salvation of humanity. Anselm hopes to make a case for the logical necessity of the Incarnation – that, even without the Gospel narrative, logic itself persuades us of the need for a God-Man to save humanity from sin and death. The book is framed as a dialogue between Anselm and Boso, who though a Christian, asks questions on behalf of non-Christians.
Starting with humanity, Anselm argues, humankind is God’s ‘most precious piece of workmanship’[4], created as innocent, righteous beings. As God’s creatures, Adam and Eve were required to maintain their righteousness and ‘absolute obedience to God’.[5] Their willing obedience to God would have served a twofold purpose. First, obedience was a mark of acknowledgement of their indebtedness to God, rendering the honour due to him as their creator.[6] Second, obedience was the means by which humanity could have preserved their happiness in the presence of God, and consolidate their lodging in immortality; placing mankind beyond the grasp of corruption and death.[7]
However, because of sin, humanity lost their immortal place, making death a deserved divine punishment. Furthermore, sin: means taking what belongs to God and rendering it to the Devil.[8] Humanity has committed a theft, and the result is the loss of their original state,. Hence they will not be re-incorporated into their original state till they pay back -in full- the debt[9] owed to God.[10]
The Fall places humanity in an impossible situation, for humans are not able to pay what they owe God. Boso sums humanity’s post-Fall situation as follows: ‘man owes to God for his sin something which he is incapable of paying back, and cannot be saved unless he pays it.’[11] The person humans have wronged measures the debt – in this case, God,[12] the payment needs to measure up to God’s magnitude. In other words, as finite creatures humanity is required to provide a satisfactory payment, with infinite value;[13] the worth of the payment needs to be ‘greater than everything that exists apart from God.’[14]. Given the inability of humanity to make recompense, God will punish humanity, subjecting them to submit their will through torment.[15] As Deme puts it,  man’s ‘Sin is not just an active opposing of God’s will, but also a self-inflicting impossibility’.[16]

The need for God-Man

The scale of the debt due to God, and humanity’s barrenness in meeting the demand, prepare the ground for the Incarnation and crucifixion of Jesus Christ.
Anselm draws a list of criterion, which needs to be present in the person who can qualify to meet the divine satisfaction. Firstly, he needs to be fully human. Only a human can represent humanity since the fall came through Adam. Furthermore, the solution also needs to come from within the race of Adam.[17] Secondly, the person must be God. For humanity will be forever indebted, owing to their future standing to the person who comes to their rescue.[18] This is not just standing in gratitude, but an acceptance of lordship. For since man/woman cannot be his/her own lord, they need to have either God or the Devil for their Lord. Hence, whoever saves humanity will become their ruler. This being the case, neither a mere human nor an angel can become humankind’s saviour.[19] Thirdly, the representative’s value of the recompense needs to be a matched to the divine value, ‘someone who can give to God from his own property something which exceeds everything inferior to God, must himself be superior to everything that exists apart from God.’[20]. Taking these three criteria into account, logically, Anselm concludes, since there is no one greater than God, the saviour of mankind must be God himself.[21] In other words, the person who will come to humankind’s rescue needs to be God-Man. In short, if humans are to be saved, then the debt must be paid, ‘which no one can pay except God, and no one ought to pay except man: it is necessary that a God-Man should pay it.’[22] Click here for Part II

[2] For example, Cur Deus Homo, Anselm wrestles with a number of Scriptural texts and works within a Chalcedonian framework. Of course, one can critic his scriptural and theological conclusion (as we shall do), but one should restrain from calling him unscriptural simply on the grounds of a difference of interpretation.